Mixing The Band - Home of the Ear Training Kit™ close

My goal is to provide high quality audio production and training services to the international music community, and bang a few drums along the way!

Sean Shannon is a professional studio and live sound mixer, educator, and drummer currently based in central Florida.  He is the founder of Mixing The Band™, and creator of The Mixing Workshop training program and The Ear Training Kit™.

DRUMMING – Sean is a lifetime DW Drum Artist (Drum Workshop – Drums, Pedals, and Hardware), and is a former world touring and recording member of Molly Hatchet, The Pat Travers Band, Brian Howe’s Bad Company featuring Jeff Carlisi (38 Special), Outbound Road and others. Sean offers an online drum tracking service, where plays drums on records all over the world through the internet.

EDUCATION – Sean earned a Bachelor of Science Degree in 1987 from The State University of New York College at Fredonia where he studied science and music production in the Tonmeister Program at The School of Music.  After that, Sean continued professional training on the job while working on records with record producers like Dennis MacKay (Judas Priest), Steve Thompson (Guns N Roses), and Malcolm Springer (Collective Soul). Sean is also a contributing writer for Recording Magazine, and his training materials are being utilized worldwide. 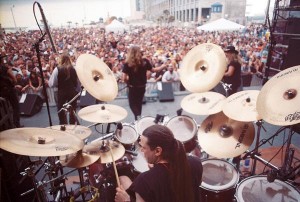 Audio engineers - If you've been waiting to try out Harrison's Mixbus, now is a good time! 45th anniversary sale, $19.

Mixbus has a great utility for checking the polarity of multi-miked instruments like drums. It analyzes the tracks and gives you the results, and you pick the one that sounds best. This is a huge time-saver from the standard method of going through each track and comparing them against each other. On this song, it helps bring out a +2dB increase and a thicker sound. ... See MoreSee Less

Harrison's AVA Spectral Compressor is great for taming harshness, better than a De-Esser because it has multiple bands and follows the pointy peaks around, very smooth. harrisonconsoles.com/site/ava-plugins.html ... See MoreSee Less